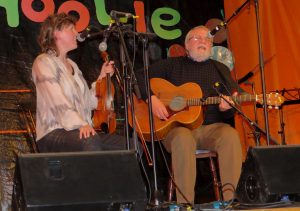 Family band Ian and Sarah McFadyen and Joey Sanderson play tunes and songs with a old timey flavour.
Ian McFadyen has been the guitarist for many a Longhope dance all his life. A local legend, he is a member of The Hoykulalees and The Stromabank Pub Choir.

Sarah McFadyen plays fiddle and banjo. She left Hoy after school and headed for the big smoke where she got embroiled in the music scene. She’s played in many outfits of different genres over the years; from indy pop band Aberfeldy to alt folk band Harem Scarem to country influenced Sandy Wright & The Toxics. She loves to play for dance and is also a member of many dance bands. She has just joined the legendary all-women folk band The Poozies.

Joel Sanderson comes from a super musical family where he started on the cello aged 3. A wild and experimental musician, his style hard to define as he swings from cello to double bass to singing to saw playing. He is musical director of a physical theatre company called Oceanallover & he plays double bass with Cera Impala & The New Prohibition and Dance Bandits (both of whom played at last year’s Hoy Hoolie).

Playing as part of the Fiddle Tree: