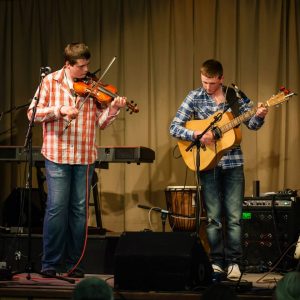 Young foot stomping due from Orkney, that put their own twist on “weel kent tunes”

At just 20 years old, fiddle player Graham is already a well known face in Orkney’s folk scene. A two-time Danny Kyle Award winner, Graham won one of the coveted Celtic Connections trophies in 2010 as part of Broken Strings, and then again in 2013 alongside guitarist Jack Kirkpatrick.

Now one third of The Eastie Boys and part of Genuine Draft, when not on stage with fiddle in hand Graham can most regularly be found presiding over sales from the box at Orkney’s Auction Mart.

Jack is a “Brims” man with his roots embedded in the island.

He is a musician whose face appears in many bands, he has played with “No Soond”, “Fara” and Emily Bourne, amongst others, and was up on stage at last years Hoy Hoolie with the “Chair”