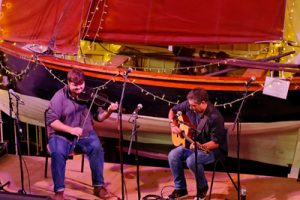 Tom Callister and Adam Rhodes are two of the Isle of Man’s most well known musical exports. Despite there being almost ten years between them in age, both have individually grown up on the island surrounded by its rich musical heritage, and the many influences from neighbouring Scotland and Ireland. Although both are multi-instrumentalists, Tom is mostly known for his lightening fast fiddle playing and Adam for his solid bouzouki accompaniment.

Both Adam and Tom have now found themselves living in Glasgow; Adam settling there after studying Music Technology at Edinburgh University, and Tom after studying for the UHI trad course on Benbecula. They play together informally on a regular basis, but are also currently involved in the award winning Manx music trio Barrule, trad pop outfit Mec Lir and new trad ‘super group’ Ímar.